In case you hadn't heard, there's a new book in town called "Hungry For You" by the ever-stupendous A.M. Harte. This is the part where I'd say "we caught up with Anna to ask her about writing and life and love," except in truth, I didn't catch up with her. I wrote her an email and demanded answers, and she said, "go away," and I said, "no! please!" an' she said, "oh fine, just this once," and fifteen minutes later, this is what I got:

MCM: Your book, "Hungry For You" is about zombies and love. W-w-w-why?

To be honest, I never consciously chose to write the anthology. I hate zombies. They terrify me, plus they’re gross.

But then Mari Juniper organized a Zombie Luv Flash Fiction Contest last summer and I challenged myself to take part. It got me thinking about love in desperate circumstances, and that’s when I started to realize that being in love can easily be a desperate circumstance if things are not going well. As soon as I had that thought, the zombies kept cropping up everywhere and I had no choice but to keep writing.

MCM: Many authors say the act of writing certain pieces can be more involving than others. Which story do you think affected you the most to write?

AMH: I’ve always been a sucker for a sad story. When I’m writing something sad, so much more of me leaks through into the story. Alive, for example, is very close to the bone—the story is about the small moments that make us feel alive, and how it’s so easy to run away from those moments rather than to embrace them. Seven Birds, which tracks a relationship from initial meet to break up, was another difficult piece to write. But perhaps the most involving was Dead Man’s Rose, a story about domestic abuse which was based almost entirely off of a nightmare I had.

MCM: Many of the stories have what I'd have to call a melancholic-romantic feel. They're haunting and touching at the same time, which I guess is connected to the fact that zombies are involved. Did you find it hard to walk that line between horror and love?

AMH: Not really. In some ways I think horror and love are two sides of the same coin. Both involve strong emotion beyond your control, and the return to very basic instincts. Besides, if you think about it, love can be very horrible. Love can hurt and destroy; it’s just as scary as horror. When you love someone, you’re as vulnerable as if you were being attacked by a horde of zombies. They’re not so different, after all.

MCM: What is it with you and socks?

AMH: I thought interviewers were supposed to concentrate on their interviewees, rather than project onto them? You’re the one with the sock obsession, not me!

Anyway. Socks. Yeah, they’re good. Keep my feet warm. Feel nice. I don’t like the ones with separate toes, though, or the ones with anti-slip soles. Yuck.

MCM: The title of the book is also the title of one of the stories, and it really works well to convey the double themes... did you just think it up out of nowhere, or was it a long and torturous process?

AMH: Stories come to me in scenes. I don’t sit there and plot an entire universe out; I’m happily munching on a chocolate bar when out of nowhere, an awesome sentence or two pops into my head. Then I write a story around that sentence to explain what it means. Perhaps it’s an odd process, but it works for me.

When I decided to write a zombie anthology, one of the first lines that popped into my head was “He’s only hungry for you”. I started writing that story, and it seemed pretty evident to me that the story had to be called “Hungry For You”. Since I didn’t have any other stories for the anthology written at that point, I began calling the collection by the same name, and it stuck.

In short: the title came unexpectedly out of my brain. Maybe that’s why zombies like brains?

MCM: What else are you working on right now?

AMH: My main project is the Above Ground series, a futuristic post-apocalyptic fantasy where humans live underground and supernaturals live on the surface. The first of the series is available online in a very rough draft version, and I’m currently working on editing it to publishable standard! I’m also working on the second of the series, Between Worlds, and posting new chapters as and when I can.

Besides that, I’m working on beating the world record for chocolate consumption, planning loads of parties for work-work, and also fine-tuning the details of my plan to take over the world. What can I say? I like to be busy.

MCM: Any last words? The executioner will see you now.

AMH: Yes: chocolate, honey and cheese, long Saturday mornings in bed and the smell of books. That is all.

A big thanks to Anna for doing this interview, despite the fact that she totally dodged the sock question. If you haven't already, go buy the book. It may just save your life. 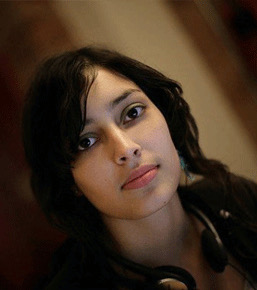