This week's episode is "Nonlinear", a great story by Terry Saltsman, and the last of the first half of the season. The reason you care about that marker is that this is where we start to get into heavy arc goodness, with both Spin and Vertex evolving quickly. There are very few "silly" eps left!

Nonlinear should probably be paired with RB111, where we first meet Octo. In that one, he's given orders to gut Nobrek Acres, and now just two episodes later, we see the fruits of his labour. Sorta. It actually looks fairly similar, but never you mind! 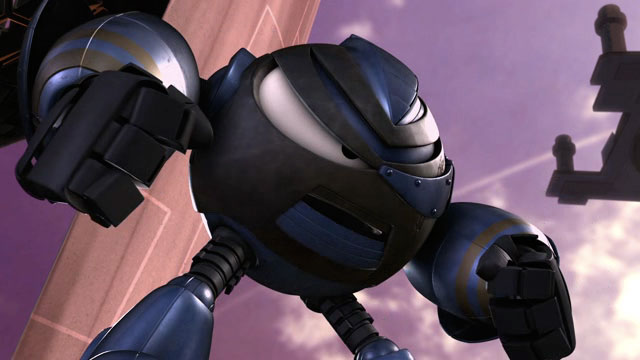 Things go wrong when Macro and the henchbots use a special flippy-upside-downy botmod to trash the city. Turns out, they're after a special medallion at the top of City Hall, and the only way past the security systems is to flip the entire building over. Through luck and coincidence, Spin and Penny are already at City Hall and get to fight off the villains. Pounder also shows up, and gets to speak my favourite of his lines: "It's you and me, squeezetoy."

Most importantly, in this episode we get to see the extension of Spin's comm messages... he keeps getting distracted in this episode, and it's not entirely clear why. You'll notice some numbers flashing onscreen when these messages come in... I actually made a little converter system (PHP FTW) where we entered secret messages and had them spit out as codes that could be used on-screen in the episodes, and then decrypted to reveal hints about finding cool stuff online. Sadly, somewhere along the way, communications got confused, and the final animation has a fake blurry effect over the numbers, which ends up defeating the entire idea. Still, the in-story effect of the numbers is just as cool. 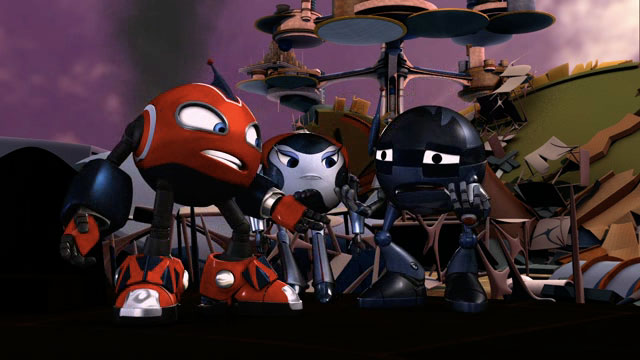 This ep has a great sequence where Lance ends up leading an uprising over the destruction of condos at Nobrek, which Terry really ran with. I love how he's so easily swayed from side to side... shows how wishy-washy he really is. And Penny continues to grow into a more and more useful character.

Next week (which may actually be in 2 weeks, depending on schedules) is a very big arc episode, with one major hint in the first 20 seconds, and the appearance of this cute wittle puppy named Pikea: 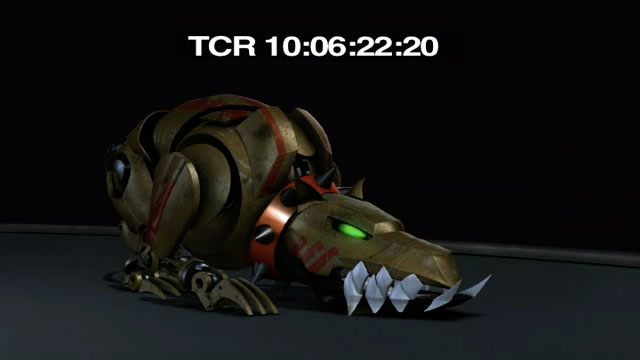