Way back at the end of July, I discovered this thing called Web Series Writing Month, wherein you... er... write a web series for a month. Being simple-minded as I am, I decided I had to give it a try. And thus, The App was born.

What is The App? Well, I knew it was going to be a scary story, because when I drew the cover, there was blood splatter. And I knew I wanted to write one chapter a day, and that each chapter would take place on its day in the story as well, so it would have a very interesting structure. I couldn't write a continuous cliffhangery beast like I usually do. The next time we saw Raj (the main character), a whole day would have passed. Obviously, I could cheat and end one chapter at midnight and start the next one right away, but there are only so many times you can do that. So it was going to be a challenge.

One thing I wanted to do was to write to format. I got the page template I'm using for Fission Chips (where each chapter starts 1/3 of the way down the page) and wrote like this: I only had one-and-two-thirds pages to write each chapter. If I blew onto a separate page, I had to trim back. I could be a few lines short of that second, full page, but if I was going to be more than 1/3 short, I had to re-think things to make it fit. It was an added challenge, but that's the kind of thing I do for kicks.

The story took a lot of twists and turns, and it was pretty intense towards the end. I know from emails and comments that people were confused about where I was going, and the prevailing theories were mostly wrong. So I'm happy to have confused you all.

I will be releasing The App as a mini-book sometime in the new year. It clocks in at 76 pages in its current state. After some editing and revising, I'll try and find a blurb or two, and see how it goes. I don't know how <17,000 word fiction sells. Probably not well :)

And now, since you've all been so patient, here are some fun facts about the story that I had to keep hidden until it was done. They are spoilery, but I've tried to make them not-exactly-spoilery...

SPOILERS BELOW. DO NOT READ UNTIL YOU HAVE FINISHED READING THE STORY

I'll do a post-mortem wrap up of The App after it actually goes to print, but so far things have been very good, donations-wise.

Thank you to everyone that's played along. I'll try and do another one of these one-month-stories soon! It was fun! 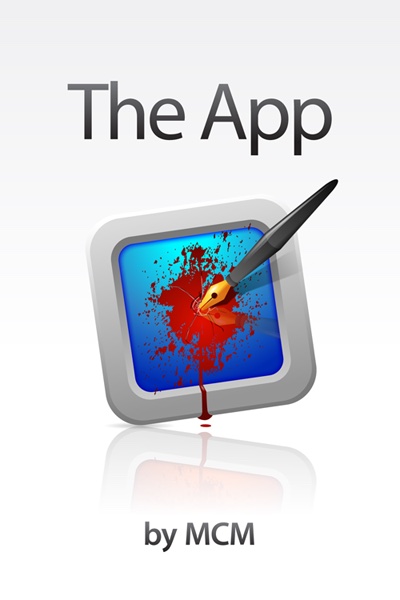