I've skipped a boatload of episodes to get here, so to help you catch up, I'll do a little recap in my recap so you know what you missed. If you haven't watched the show and are planning to, you may want to skip this entire post.

So Spin is the only bot in the city without a tribe. He's been getting in trouble for calling Vertex a spider since 101, and always very decidedly by Captain Pounder. He gets his super-speed, finds the Boomstick, and has trouble when the city starts talking to him. Then a creature named Vett shows up, and all of a sudden, everyone in the city can appreciate that maybe there ARE giant spiders running around. There's a race to get the last artifacts, and Spin falls on the wrong side of the law, gets fired, and then arrested, and escapes from jail. Captain Pounder is working with Vertex to take over the city, and Spin is the only one who can stop them.

Now we get to 126. Spin realizes the last artifact is the medallion overtop the FCPD inpipe. In reality, I'd written that to be the actual inpipe was the last artifact, but two things happened along the way: the size of the trax got a lot bigger (I always envisioned them as being maybe 2 bots wide and curved) and secondly, we had a lot of expenditures in the tail end of 126, so removing a big piece of trax wasn't in the cards :) 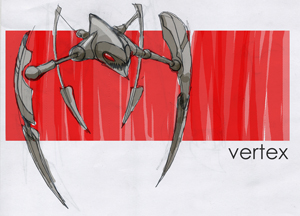 This is the episode where things get complicated for our characters. Manx had been a Kei'zatsu before, but she went over to the dark side (we learn more about this next season); Penny is having to use the training that Captain Pounder put her through a few episodes before; Spin is up against impossible odds, and he finally starts to do things with a bit of strategy, rather than just going with the flow.

Normally, an episode of RollBots was scripted at about 30 pages. This one was over fifty, and you can feel it in how it plays. There were all sorts of subtleties that were just dumped as we went, because it was too packed to keep them around. The battle sequence between the Kei'zatsu and Vett came out really well... there were actually a few moments in the storyboards where it was a bit too violent, and we had to cut it back. But it was great to see Penny kick ass, and Manx let loose with her flares in such a wonderful way. One thing that was lost in translation was Koto getting knocked off the Hub while trying to save Penny... that was supposed to be a little more tragic than it seemed, but we were afraid it would look like we'd killed a character, so we pulled back a bit. 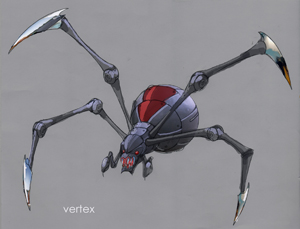 (fun trivia: Spin arrives to confront Vertex, says "this is the end of the road, Vertex", which is a line from Transformers: The Movie (the 80s version) that I've been wanting to use for YEARS now)

So now we come to the last moments of the episode, where Spin is confronting Vertex, and we can see that Vertex has the upper hand. Just as he's about to get speared, Spin is saved by Captain Pounder! And not only that, but Pounder and Vertex know each other! And not only THAT, but they speak the same spiderbot language that Vett's been speaking! (and not only that, but it took a good long time for me to write out that language phonetically so the actors could pronounce it properly the first time around). And not only THAT, but it seems that Spin actually DOES have a tribe, and it's called Zuushin, and Pounder has known all along, and Vertex most certainly did NOT know. 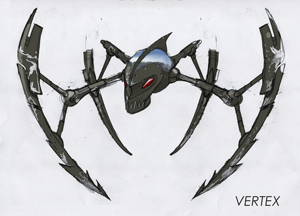 (BTW, also at the start of the season: the floor of the FCPD has the Zuushin logo on it (the red one with the wings that goes with the branding for the whole series). That was a mistake by the animators... they got confused about which logo went where. It was replaced before it went to air, but they put in another wrong one the second time around, too. Murphy's Law or something. There are actually a few instances where the Zuushin logo appears where it shouldn't, but never mind that for now)

Spin has some flashbacks here, and I want to half-explain them to you: first, we see that Pounder used to have another eye, and he lost it to Vertex. Showing that was no easy feat, because implying characters maiming each other is not very doable for kid-friendly TV. Then we see Spin being shepherded away from danger by an injured Pounder. You may think that was just a question of taking off his eyepatch, but in reality, under that eyepatch, Pounder was just a seamless ball (in terms of modelling). The animators had to create a whole new version of him with that nastiness inside, and they had to do it VERY FAST, too. But the result is striking, I think. 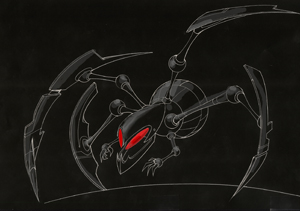 The only other thing we learn from the flashbacks is that Pounder says "He can't know until he's ready," which I hope explains why he's been so protective of Spin all season: he didn't think Spin was ready to step up to the plate, and he was trying to shelter him as much as possible. But now they've all run out of time.

Vertex takes himself and Pounder off the edge of the platform, about to drop into the World Below (are those mountains down there? hmm...), and Pounder says "Make me proud" before falling to his doom. The Safety Net is coming back on, but will it make it in time? And what's down there? A spiderbot invasion? We end season 1 on a major cliffhanger (literally!), and the shape of season 2 really goes from there. It's not just more of the same. 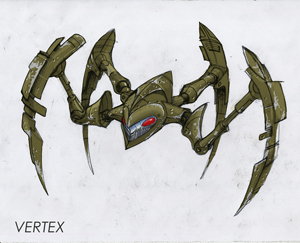 The music in this episode, done by Serge Cote, is probably my favourite music in the entire series. I have heard from several people that the sequence at the end where we have the flashbacks is so powerful that people have been moved to tears by it. Which I admit sounds silly given the context, but really, Serge nailed this show. He made marbles seem important.

Now about what happens next: I know exactly (and I mean shot by shot) what happens in 201, but there is a wrinkle: the budget for season 2 is almost certainly going to be a lot lower than season 1, and in that case, we may not be able to make many (or any) new characters. If that happens, my plans are derailed somewhat, and I need to think of an alternative. So there are seeds in this episode that you may never see the end of. So while I'd like to pretend I know what's going to happen, in some ways, it's going to be an adventure for me, too. Though the basic underlying structure will be the same. So don't worry. 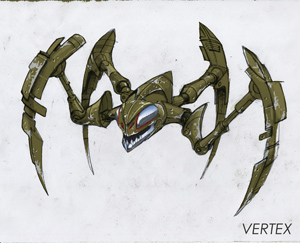 And thus, we reach the end of season 1 of RollBots. I know I skipped a lot of episodes in there, but pretend you didn't notice. I hope you've enjoyed the show as much as we've enjoyed making it, and trust me, as soon as I have news on season 2, you all will be the first to know!