Today is the launch of Fission Chips, my fourth book in the "12 books in 12 months" experiment. This time around, I'm stretching the definition a bit: Fission Chips is going to be eBook-only, and it's not finished yet. On purpose.

It's all because of the excellent MeiLin Miranda and her series "An Intimate History of the Greater Kingdom". She's writing as she goes, and involves her community in the process in ways that make me giddy. She releases a new chapter every Tuesday (sometimes Thursday and sometimes Saturday), and is generally one of the coolest writers on the internet.

So because I'm a shameless copycat, I wanted to emulate that, and this is where Fission Chips came from.

Gare Marx has been a PI for all of five minutes when he discovers he sucks at it. The mob wants money he never borrowed, he's suspected of murdering someone he hasn't met, and he's hired to find a woman who may be involved in some extremely shady business. That, and his secretary is an amoral jiu jitsu-loving sociopath.

With only hours before his life is ended in multiple (possibly concurrent) horrible ways, he has to dig up the courage and/or resources to solve the case(s), before the cases "solve" him.

It's a detective story with a series of interweaving plot threads that I've planned out ahead of time: the mysteries are on auto-pilot, all in motion before the first page. What you, the reader, get to do is decide where Gare goes next to solve all the cases. It's wide-open voting season, friends, and lives hang in the balance!

New chapters go live on Thursdays, and you get until the following Monday night to suggest and vote for the next course of action. I take the instructions and apply them to the plot, and see what happens.

Now of course, it's not all that simple. If you get close to busting one of the criminals, you're going to encounter resistance. So I've enlisted 50WordStories.com's Tim Sevenhuysen to act as the story Antagonizer, in charge of changing the battle plan whenever necessary. Tim has agreed to make you all cry, and I have no doubt that he will succeed. So be aware that the auto-pilot nature is prone to meddling. It's not as easy as it seems.

The first four chapters of the book are up already, and some of my early beta testers have already been voting. Don't be shy! It's 100% anonymous, and 200% fun! Help Gare survive his crazy day! 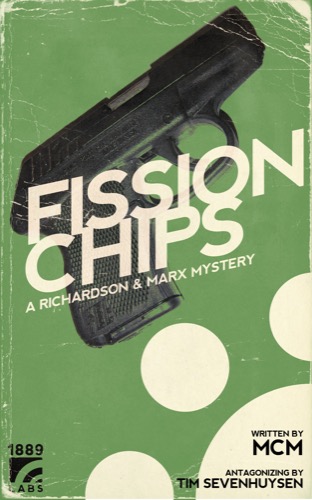