I think I've said before that I hate doing reviews. You'll see why shortly...

TimeSplash by Graham Storrs is a truly great sci fi novel about the fallout of time travel, but not in the way you usually see it. In a nutshell: when you travel back in time, you can't change history, but you can make "splashes" that ripple through the fourth dimension, causing havoc in the era you came from. The concept is illustrated brilliantly in the first chapter, and from there things go off the rails for the characters. It's tense, actiony and generally a brilliant execution of a brilliant idea.

I was given this book by Anna (gifted PDF! woo!) after she insisted I was being lazy and not reading what she told me to read. She said she'd read it in one sitting (or something, I'm too lazy to look it up) and sure enough, I did pretty much the same thing. This is definitely one of those "can't put it down" books. I was looking for a chance to take a break, because I wanted to prove her wrong, but she was right. It was that good.

The details of the world are really well-articulated and convincing. End of oil, economic collapse, the fact that America is basically a Christian fascist state with the CIA as their religious enforcement agency, the way the world ignored and then suddenly fears time travel... it's all very, very smart. This is not a book where the sci fi technology exists in a vacuum and only pops up when convenient. These characters have been living in this world their whole lives, and it shows.

The big bad guy is a lunatic, and at times he goes a bit over the top, as if to sell his psycho-ness, but it doesn't really detract from the story at all (in fact, it helps sell other characters' motivations). The supporting cast is very good and no one feels like they only exist to serve a function, which is nice in this kind of story.

If you want to read the book and enjoy it without my opinions tainting it for you, stop reading now and just go buy the book. Nothing below this point is really important. I promise.

Update: Before you read this next part, or maybe after, or maybe simultaneously, read this response by the author. It makes a very big difference. I'm leaving my notes below so you know how obsessive I can be when I get on a roll :)

Now for the part of reviewing I hate. The book isn't perfect, but I can't say it was the book's fault so much as my own prejudices. Here's the thing: the protagonists are very, very young. Sandra, a timesplasher's "bitch" in the first chapter, goes from 15 to 17ish over the course of the book. Jay, a timesplash fan-turned-secret agent, is only 19 when things kick into gear. To me, the two years between the first events and the rest of the book seem too brief for Jay to have gone from half-assed punk to an even semi-capable law enforcement officer. And even so, I can't wrap my mind around the fact that these two are in charge of saving the world.

Here's where I go off the rails, because these things get into my brain in all the wrong ways. I don't have a problem with Sandra being 15 and then 17. I mean, it's a bit young for my tastes (given the things she does in the story), but then I have a teenaged assassin in Arkady and Kain, so obviously I'm not one to criticize. But then you have Jay, who really seems to me should be an early-20s character, say five years, six years after the first chapter, grappling with the demons he witnessed when he was still a kid. But instead, he's STILL a kid, somehow playing in a grown-up world, and every time he engaged with his superior officers in the story, I got this nagging feeling we were slipping into inauthenticity. It seemed like the training he'd go through to join M15 would have to take more than two years to complete, no matter how brilliant he might be (and he never comes across as especially brilliant). And every time I was about to let it go and just enjoy the story, there was some mention of either Jay or Sandra being a teenager, and I got sucked right out.

So then I started wondering who Graham Storrs was, because (and I mean this in a nice way, honest) stories where teenagers take on adult roles like this tend to be written by teenagers. But Storrs isn't a teenager at all, so that theory fell apart. There was just something off about it... it's not that teenagers CAN'T save the world, they'd just have to do it from the outside, not as part of a serious intelligence agency. In the very real world of this book, it seems jarring that this kind of rule would be ignored. Old people don't like young'ns, and they hold them up as much as possible :)

I obsess on strange things, I know. No other reviewer was bothered by this, so you don't need to listen to me at all. I just wanted to mention the one thing that bugged me. Well, that and the fact that every time a gun was used, we got its make and model. That happens in all kinds of stories, and I still don't understand it.

So yes. TimeSplash: good book. Buy it, read it, love it, and tell me how silly I am. 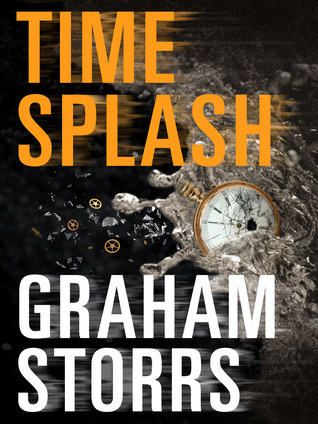