This week's episode is "Goaaaaaal!", written by the infamous Vito Viscomi*, and is one of the first three RollBots episodes written. It introduces the game of BotBall, and an entirely new sub-tribe to Flip City. Spoilers abound, so watch the episode first!

Waaaaaay back when we were first starting scripting, I had three episodes that I wanted to do. The first was the pilot (101 "Training Day"), the other was 108 "Crontab Trouble" (an action sci-fi ep), and the third was "Goaaaal!", which was 100% pure comedy (at least on paper). Mark Leiren-Young got the actiony one, I took the pilot, and Vito was left to turn this vague story about a sporting even into the funniest ep of the season. 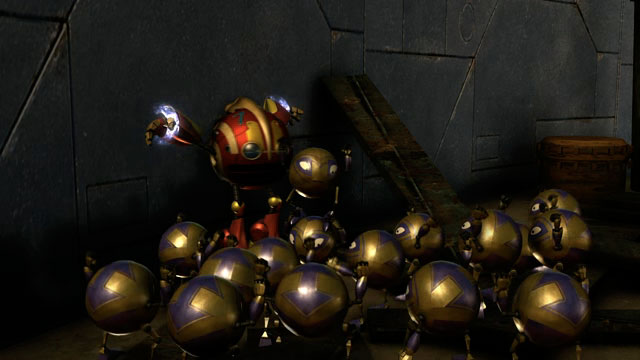 He did such a good job, it's really quite silly. There are too many thing to call out, but I will say this: Gary Chalk plays the Kenchi-ku leader (the one that keeps making grand pronouncements), and when we FIRST heard him speak, it sounded very "William Shatner in RollBots!". So we pitched up his voice like mad, and then Craig (producer) and I spent an afternoon giggling like idiots as we tried to choose exactly which variation on the pitch we liked best. The line where he is suddenly faced with Tinny and says: "Ahh! A giant!" nearly ruined my keyboard.

Oh, and honestly, he had a character named "Roboto" (so he sounds like a Brazilian soccer player) and he never ONCE suggested anyone say "domo arigatou" to him. THAT is self-control.

There were a few action moments in the story that made more sense in the script than they ended up in action, which is too bad, because they would've been great to see. (we actually finished our first season post-mortem the other day and one of the comments was to be sure we always write detailed, explicit action directions into scripts... previously, we'd just said: "Spin gets into a fight with the Zurasho, weaving about like Druken Master as he deals with the vertigo".) And honestly, the ending makes very little sense. But that's ok. It was our first try at writing the show.

If you recall, there was a point late in the season when we were going to have to cut an episode to make room for 102 "Breakpoint"... for a long time, this was going to be the episode to die. There were concerns about asset counts and solidifying the story with our new "action first" motto. Luckily, it got to stay, because I honestly think it's one of the best episodes we've done. And it's not just because of the botball voices.

(side note: the game of botball is highly simplified in this... I originally intended the playing field to be a bowl with a bunch of holes in the ground, but only 8 of which were ever open at one time. Underneath were tubes that connected one hole to another, so you would go down one and end up in a very specific place... but you didn't know where the tubes would align until the game started. Added to that, there was a giant divider across the middle of the field that slowly rotated clockwise, so you would HAVE to go down the tubes sometimes to avoid it, so you could get in a place where you could kick the ball into the goal posts. Unfortunately, that kinda thing is WAY too hard to board and choreograph, so the game became a lot more basic in its final form.)

Next week is a fun episode with the Mayor and Octo, but the big twist is you get to find out how Lance becomes the leader of people's revolution! 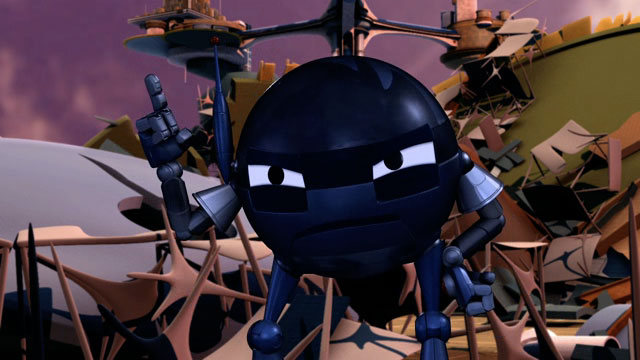