End of Arkady and Kain

Arkady and Kain wrapped up two days ago, and because of travel and other commitments, I wasn't able to write anything about it until now. Because of the odd nature of the piece, I wanted to get into the nitty gritty a bit, just to lay out what I was trying to accomplish, and maybe see what went wrong.

But before I do, I want to announce one thing: the story will be going offline in ONE WEEK (September 9, 2010) for an indefinite amount of time, while it is edited and revised into something better. So if you want to read it in its current form, that's how long you have.

SPOILERS BEYOND THIS POINT!

From the first version of A&K almost 20 years ago, I had it in my mind that this was a tragedy. I knew there'd be a death at the end, and in the movie version from 1996, I think my favourite moment was when Tev leaves the gun at Kain's feet in the cemetery. But the real question is how to get from where we start — Arkady as a goof — to a place where anyone cares what happens to these people.

When I did my outline, I thought the key was a series of switches. Arkady starts off really obnoxious, quick-witted sarcasm in everything she says. Based on the livewriting feedback, I knew I might be going a bit overboard, but I thought it was a good way to progress. The reason she was so annoying was so you'd be prepared to see more depth the more you knew her. It's like a literary cheat, I guess... you can't come to love someone if you love them already. You want to see that evolution, so I needed her to start somewhere other than where you thought she'd be.

The first BIG switch would be when you realized she was in way over her head. That was going to happen around the time of the first assassination attempt, and in the outline, it seemed like a good place to strike. Unfortunately, the result was really confused. Arkady was shot at, and basically disintegrated on the spot. She probably should have kept up her attitude (to Kain's displeasure) for a lot longer, but slowly revealing cracks in her armour, so that Kain (and the reader) would almost pity her, and want to protect her. As it is, I don't think it worked. Arkady dresses the way she does and lives the way she does because she's trying to make the most of an impossible situation.

And that situation is the other major failing. I don't think it's clear enough that Tev put her into this mess, and left her with almost no way to escape. Pretty much every character gets tremendously emo at the midway point, either lamenting their lot in life, or getting way too philosophical. I think I need to inject some more action (not necessarily fighting action, just actions) into the second half, so it breaks up the philosophy. Tev vs Kain vs the world is a very big part of the story, and how Arkady fits into it, too, but you can't get there from here. I need some more breathing room in there.

Finally, I think the last chapters work well. I may have gone a bit too flowery in the language for the last chapter, but I hope it gets across that Kain has a difficult decision to make, too, now, and just like Arkady, none of the choices are good. I don't usually end with downer endings, but this one was too hard to pass up. What happens next is up to the reader (to some degree), and I'm interested to know what you think Kain will do with that gun.

Really, I could have written another fifty thousand words about Arkady and her relationship with UFIT, and how Tev connects it all together... but I was trying to tell a quick story about a tragedy in the making. I think the revised version of the book will have a lot more in it (probably some great elements I had to cut because they didn't fit in the 31-day structure), but you'll have to wait to see them.

If you have any questions or thoughts about Arkady and Kain, let me know in the comments or by email or Twitter. I'll do my best to answer them, without giving away spoilers about the revised edition and future projects :) 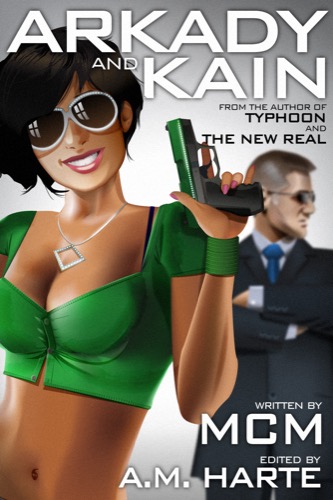